Falling Pregnant and My First Trimester

With our wedding planned for January 2016, I decided to go off the pill in around September or October 2015. I had been on it since I was 16 years old… so 17 years in total! To say I was scared shitless to come off it, is a total understatement. I didn’t know myself without it!!

So I started taking my preggo vitamins, and was also taking a herbal supplement to assist with any hormone fluctuations during this time (and prevent any acne that may return with a vengeance!) Lucky for me, my body coped supremely well with coming off the pill. I had NO side-effects, NO acne and NO hormonal melt-downs (my husband may have another opinion haha). I was very proud of my body 🙂 My period came back like clock-work, and my cycle was pretty spot on for the following months…

We started trying properly in January 2016. We aimed to have sex three times a week, every week, to give us the best chance of hitting that egg! We were both eating well, but we were still drinking alcohol and weren’t too crazy strict with our diets (mind you, we eat a pretty clean and organic diet as it is).

This was MUCH shorter than we had anticipated… we are both 33 and because I had been on the pill for so long, I assumed it would take a while. Nope… not the case 🙂

I was pregnant in this photo (me on the left) taken the 27th February 2016… I didn’t know it yet though (hence the wine! And I drank a lot of wine on those couple of weeks before I found out!!!) I remember wondering why I felt so bloated that night!!! 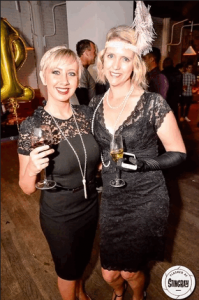 I had a scare when I first found out. And I want to share this because it is a scary time in those first 12 weeks. You overthink everything, and anything that you experience, you google it to see if it’s normal… this is SUCH a silly thing to do (but don’t worry, I was guilty of it too… but never again!) LADIES, GOOGLE IS NOT YOUR FRIEND!!! People who share their stories on forums are generally sharing BAD experiences.

IF you are experiencing something that you’re not sure about, please talk to your doctor. Or if it’s not a serious question, ask your mum, friend, sister… someone you can trust.

So my scary story is…

The first blood test I had to confirm I was pregnant showed a really low HCG level. It was like 27 or something. So I was SUPER early!! I must have only been 2 or 3 weeks pregnant.

Anyway, I couldn’t get into my normal, awesome GP, so impatiently, I booked an appointment with a GP at a recommended woman’s clinic to start the ball rolling, and find out what I had to do next. She insisted on doing another blood test… even though I had just had one, two days before.

I rang two days later to get the results of my test. This doctor (who will remain nameless… even though I’d love to name and shame her), told me that my “HCG was very low, and to be prepared to have a miscarriage”. These were exactly her words. Her tone of voice was like she had just told me that everything was normal. She had no empathy, no concern, NOTHING! All she said was, if I start bleeding, take myself to emergency. I asked her what the HCG level was, and she just said “it was low and had hardly gone up from my first test”.

So… I thought my baby was done for. I was pretty upset, but I still had hope. I spoke to a couple of girlfriends who had had babies, and they reassured me that sometimes your HCG levels can start off low and slow, and then they pick up speed as time goes on. So I held onto that hope.

I found out off another friend, that your HCG levels are supposed to double in a 48 hour period. So, I rang back the surgery two days later when they were open, and asked to speak to a nurse to confirm what my HCG level actually was. She said it was 59… That is MORE than double from my previous HCG reading of 27, two days beforehand!!! She said everything sounded fine, and not to worry???!!!

So as I like to do, I put in a formal complaint against that stupid doctor. Idiot!!! God help any other woman who have her during their pregnancy.

SO I was pregnant again!!! And I could finally let myself believe it a little bit more.. even though I didn’t want to properly accept it until my first scan at 12 weeks.

So back to my pregnancy… My boobs grew three bra sizes literally over night! I unfortunately got stretch marks on them straight away… nothing my twice daily moisturising could do 🙁 Ah well. And I COULD NOT STOP EATING CARBS!!! Holy shit… I’ve never eaten so much cereal, bread and rice crackers in my life (and I don’t normally eat bread). And if I didn’t eat, I’d wanna be sick.

Needless to say, I put on about 6 kilos in my first trimester!

I went and booked in with my proper, awesome GP at Bundall Medical Centre, Gold Coast. She told me everything I needed to do in regards to appointments, etc, etc. She was extremely helpful!

I was lucky to avoid morning sickness (I felt nauseous on occasion, particularly when I hadn’t eaten), and didn’t really have any other side effects, aside from sore boozwas and feeling super tired and hormonal (I remember there were a couple of days there that I could not get out of bed. Or I would just cry for no reason).

One of the hardest things for me was the fact that I couldn’t drink wine anymore. SOOOO SHIT!!!! I really struggled with this at first. I love my red wine! But, I didn’t cave… I didn’t have a drop. I know some woman do, but I just felt that I didn’t want to.

We told people straight away. I didn’t see the point in hiding it… if I was going to lose it, I figured I had more people to give me support if I did. Though, the Facebook announcement wasn’t until after the 12 week scan (as soon as it’s on fb, shit gets real!) 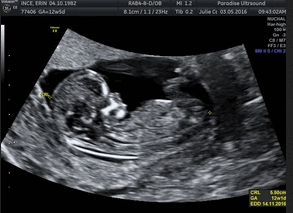 The above picture is our little “Cletus the Fetus” at our first scan… big forehead and all 🙂 So in love!

So, there you have it. The first trimester is an exciting, scary and weird time. You don’t look pregnant yet, but you feel fat already. You want to walk around with a sign saying “IM NOT FAT, IM BLOODY PREGNANT”. Or, you just do what I did, and get around in moo moos and hippy pants… no one knows the difference.

I downloaded an app called “BabyCentre” which has this function to take a “bumpy” each week. I highly recommend doing this… it is amazing to see your tummy (and everything else) grow each week (you cant see too much growth in the first trimester… the magic happens in the second trimester!!)

And ladies, as long as you’re eating healthy and still doing some light exercise (whatever you can manage, and whatever your doctor says is ok for you to do), don’t worry about how much weight you put on. Don’t compare yourself to anyone else either. EVERY PREGNANCY IS DIFFERENT, AND EVERY WOMEN’S BODIES RESPOND DIFFERENTLY. I put on heaps more weight compared to my friends. It used to bug me at first, but my body is just doing what it needs to do. I was eating really well and in my first trimester I was walking daily and doing yoga 3 times per week. And most importantly, my little Cletus was healthy and growing like a champ. That’s what matters.

I’m now 27 weeks pregnant, and going strong!!! Stay tuned for my blog about my second trimester in a couple of weeks… when shit really gets real xoxo